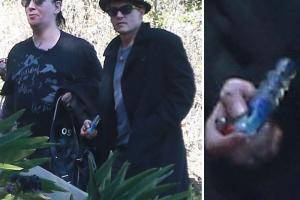 Looking at this picture, that was taken just a few days ago in LA, we know, who will be a new "the stoner" celebrity of 2014 - Johnny Depp.

Johnny Depp is a great actor, film producer and a musician; Not once he impressed millions of people with his acting skills in different movies. Johnny Depp has won the Golden Globe Award and Screen Actors Guild Award for the Best Actor. Everyone remembers him from "The Pirates of the Caribbean" , "Nightmare on Elm Street" and other great movies. Everyone knows his great love for playing outlandish characters, and now seeing this photo, it makes us think, what really makes him so great in all this movies - it could be weed.

Johnny Depp and his buddy Marlin Manson were caught on a camera while venturing in La. Johnny tried to hide his glass bowl pipe, but it was too late. So now Johnny Depp will definitely make the top of the list for "The Stoner" Celebrities 2014!